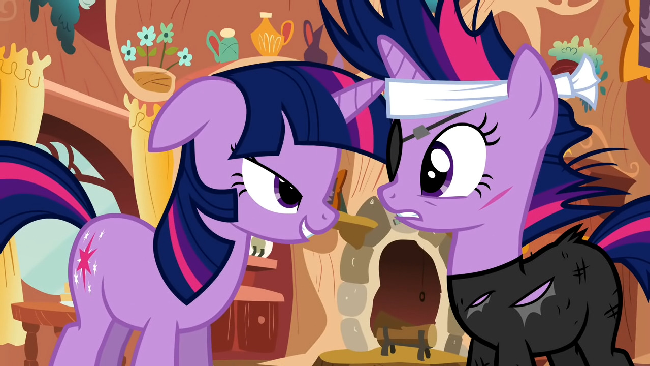 Two Twilights went a-reading on a Sunday afternoon, but one of them found it very hard to concentrate.

After pouring through anatomical atlases, she got herself all worked up and her thoughts wandered to her proclivities.

She knew she liked mares ever since she read some of the juicier passages in the Princess's diary, but it was all theoretical; she's never even seen a vagina up close, except for these tightly crosshatched copperplate prints and her own in a mirror once. (She's seen vulvas, vaginas are specifically the internal part, as the anatomy textbook sprawled out before her would remind her.)

Her cheeks was getting noticeably warmer as her thoughts wandered. She glanced over to herself at the other end of the bookshelf, fully engrossed in a geographic survey of the Badlands. This Twilight snorted to herself, as if she was trying to blow away the first Twilight's intrusive gaze.

“So your thoughts are the same, right?”

“I mean, not the same-same, chaos theory being what it is, very few of our thoughts would actually be identical, but we have the POTENTIAL of thinking the same thoughts, right? If I want something, there's an overwhelming chance you'd want it too, you just haven't thought about it yet...”

“What is it?” Grumpy Twilight sighed, but didn't lift her nose up from the book. “I'm kinda busy right now.”

“So, er, I got a bit... er, distracted studying anatomy and I was wondering how it would feel like, licking my own...” her speech was cut short by Grumpy Twilight nonchalantly swinging her tail aside, and spreading her legs to expose her sex.

“Go right ahead,” Grumpy Twilight said into her book. “Just don't interrupt me while I'm reading.”

“A-are you gonna do something?” Grumpy Twilight asked impatiently.

“They are the same as yours, they are not special,” Grumpy Twilight said through a scrunched muzzle.

“...and such a gorgeously pink labia minora...”

“Yes your highness!” she responded with a perky chirp.

Grumpy Twilight moaned into her book. Any attempt to remain stoic had been thwarted by Twilight's curious tongue. Her mirror-twin seemed to know exactly where she wanted to be simulated next and she was completely at her mercy.

“Keep going!” she demanded. “Don't stop, I'm so close, don't...” Twilight trailed off. Before she could even finish the sentence, she was already halfway into the best orgasm of her life. When she finally came to her senses again, she noticed she had drooled into her book and messed up the pages.

“Sigh, you interrupted my reading after all...” she muttered to herself.